What are the Pros and Cons of Swim Spas?

Swim spas give you the chance to swim every day in the privacy of your own garden, and without taking up the space or going to the expense of a full swimming pool. But are swim spas the right choice for you? Here we look at the pros and cons of swim spas so you can make the choice for yourself. 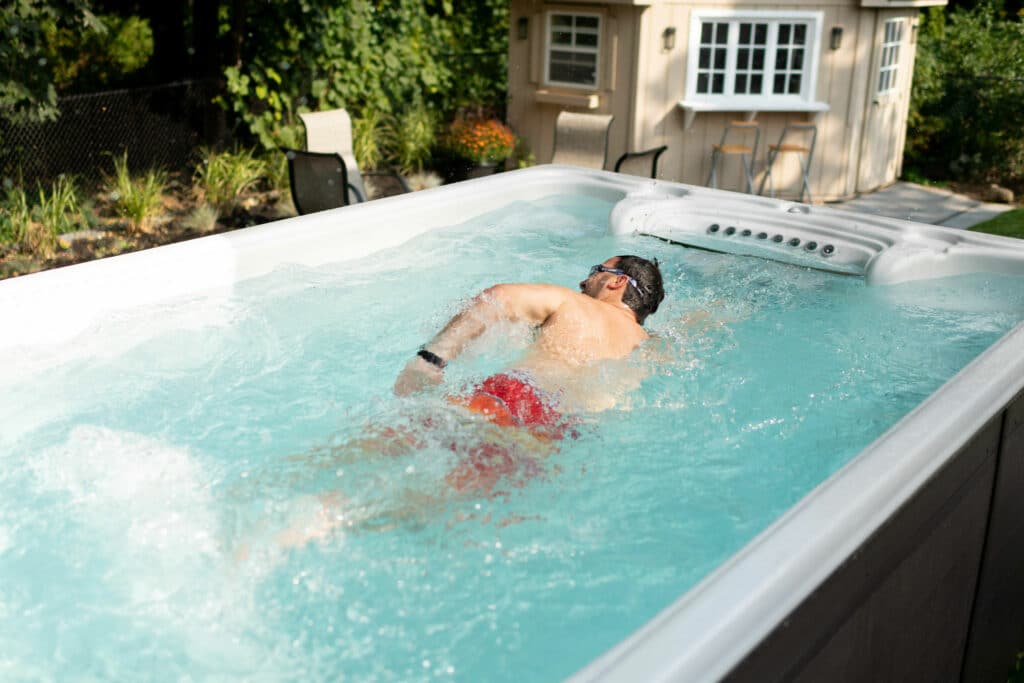 The pros of swim spas

When compared to a traditional swimming pool, swim spas offer an array of benefits and major advantages.

Swim spas enable you to swim regularly and practice your stroke, but unlike a swimming pool, they can also be used to relax and socialise like in a hot tub. The range of swim spas at Hydropool Surrey gives you the best of both worlds: pros of a hot tub and advantages of a pool collected in one product.

The heating system of swim spas allows you to use them year round, whatever the weather or season. This is particularly important if you live in a country like the UK, where the warmer weather tends to last less than four months and is often unpredictable.

Certain factors boost the energy efficiency of swim spas. These include fitting a well-insulated cover to the swim spa, and opting for a below ground installation, which keeps the swim spa more insulated.

If you invest in a swim spa with a pressurised filtration system, the energy used to keep the water clean is reduced. Hydropool’s self-clean technology ensures that the water is filtered and cleaned every 15 minutes, making it the most energy efficient filtration system in the world.

Another advantage of swim spas is that they provide a built in current system so that you are effectively swimming on the spot rather than swimming long laps of a pool. Swim spas therefore use up far less space in your back garden than a traditional swimming pool, and are a good option if you don’t want to lose a huge area of your garden.

The cons of swim spas

There are downsides to consider with everything, including swim spas. Let’s take a look at some of them.

This is a personal choice, but one that has to be weighed up against the benefits that swim spas can still provide, including maintaining regular exercise, practicing your stroke and, importantly, taking up less space in your outside area than a swimming pool.

The current in some swim spas can be turbulent, leading to a laboured swim.

Hydropool swim spas however feature powerful jets that spread the current evenly over a wide area whilst also dissipating turbulence through swim fins which prevent the water from swirling around.

Hydropool hot tub and swim spa models also allow the user to control the swim current according to ability.

Summing up the pros and cons of swim spas

Swim spas offer many benefits. They suit any level, from beginner through to professional swimmer, as well as offering social use as a hot tub. They take up far less space than a swimming pool, and offer the added advantage of year-round enjoyment.

The unique self-cleaning system offered by Hydropool swim spas makes them incredibly energy efficient, and the current control will ensure you always get a smooth swim.

To find out more about swim spas and if it’s the right choice for you please get in touch, or make an appointment to try one out for yourself at our purpose-built indoor showroom.

Hot tubs are more popular than ever before, especially hydrotherapy hot tubs. Many people across the UK and the world…

How Much Does a Hydrotherapy Pool Cost (2023)

Hydrotherapy pools are very popular with people suffering from injuries, stiff muscles and other issues impacting their movement. Sometimes, people…

Ultimate Guide to Hydrotherapy for Back Pain: Best Exercises

Back pain, whether temporary or chronic, is a serious problem for people across the UK. It has many potential causes,…